For research use only. Not for use in diagnostic procedures.

SimGlycan Software (a product of PREMIER Biosoft) predicts glycan and glycopeptide structures from SCIEX mass spectrometer-acquired MS/MS data, facilitating the identification of glycosylation sites and post-translational modifications. The software works directly with *.t2d and *.wiff files. Data generated from all SCIEX instruments can be processed using SimGlycan version 5.4 (and later), including the new support for the MIDAS™ Workflow. A perpetual license is included. Any upgrades of software features including database content are available at free of cost for the first year. Thereafter, for continued access to new upgrades of the product, this license will have to be renewed for each successive one-year term by paying an annual license fee to PREMIER Biosoft. This software is also available from the PREMIER Biosoft website 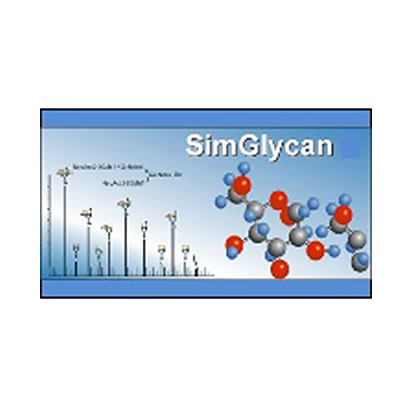 *Available only in SimGlycan Enterprise Edition

Take advantage of the unique capabilities of SCIEX instruments: Because of its large mass range, high sensitivity, and soft desorption and ionization, MALDI time-of-flight (MALDI-TOF) mass spectrometry is widely used in the molecular weight determination of underivatized oligo- and polysaccharides. Traditionally, post source decay (PSD) has been used for structural analysis, and this can provide information related to sequence and branching; however, a lack of abundant cross-ring cleavages limits the linkage information that can be deduced from such experiments.

The MALDI TOF/TOF Systems are the only SCIEX instruments that combine high-energy MS/MS for cross-ring fragmentation for carbohydrate analysis (A and X- ions) with good precursor ion selection. This permits acquisition of more information on linkage position and points of branching, allowing the automated search routine in SimGlycanTM Software to correctly identify and characterize glycans without any secondary experiments.

QTRAP Systems are unique, hybrid triple quadrupole/linear ion trap instruments that delivers triple quadrupole scanning functions (e.g., precursor ion scans, MRMs) coupled with a high-sensitivity, ion-trap MS/MS and MS3 scan to enable sensitive and selective experiments for glycan and glycopeptide profiling. Because of the unique instrument configuration of the QTRAP System, the MS/MS spectra do not exhibit the low mass cut-off demonstrated by 3-D-ion traps. Subsequent MS3 fragmentation spectra can be obtained allowing mechanistic studies to be performed on the diagnostic fragments to confirm a predictive SimGlycan Software search result.

Increased efficiency of targeted detection for glycopeptides without enrichment strategies.

The Destination for All Your Support Needs